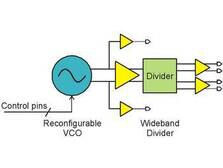 This project deals with a low power consumption multi-band VCO, which is able to cover several LTE bands. A current reuse VCO is a good approach for low power design. However, this topology has a critical problem which is an amplitude imbalance between differential outputs. A spontaneous Transconductance Match (STM) technique has be proposed to decrease the amplitude imbalance. The measured imbalance ratio is less than 0.7%. In the multi-band VCO, there are other trade-offs such as phase noise and load-pull effects. Those parameters should be considered at the same time.