Skip to Content Jump to Main Navigation Skip to Search

The Chair of Integrated Analog Circuits and RF Systems

You Are Here: Solar electricity generation in public road infrastructure

In the Interreg EMR project “Rolling Solar” seven research entities and thirteen companies collaborate on the development and demonstration of PV-integrated road elements and road infrastructure, to generate electricity from sunlight without additional use of land while hiding the technology from sight.

With financial support of the European Union it is explored and demonstrated how integration of photovoltaics in public road infrastructure can be made economically viable to generate durable energy without affecting primary functions for transport. RWTH Aachen University is partner in Rolling Solar. 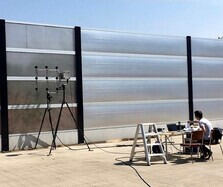 Germany, Belgium and The Netherlands are internally connected by a total of 1 million kilometer of roads. This represents a huge area of built environment that can be used for renewable energy generation by integrating solar cell materials into road pavements and road infrastructure. In recent years, promising demonstrators have already been realized where crystalline solar cells are incorporated into bicycle paths, roads, and in a wide variety of noise barriers. However, costs of such systems are still high and reliability can be improved. This project aims to reduce cost by using flexible thin film solar sheets and by a more effective and reliable integration of the solar cells. Partners along the value chain from PV production up to installation and grid connection explore and demonstrate innovative approaches in close collaboration with regional research institutes. Also, an inventory and exchange on regional policies, regulatory framework, and building and safety regulations for electric energy generation in public infrastructure is foreseen.

TNO is one of the partners in the Public Private Research Collaboration Solliance, and is the formal project coordinator. In addition to the Solliance research partners ECN.TNO, imec, University Hasselt (B) and FZ Jülich (D), also ZUYD (NL) RWTH Aachen (D) and HELMO (B) are participating. Thirteen private companies along the value chain participate as funded partners, while other companies are connected as users or suppliers. Eight public and private stakeholders from the three nationalities support the project through an advisory committee. A full partner list can be found on www.rollingsolar.eu .

The project Rolling Solar is executed within the framework of the Interreg program Euregio Maas Rijn (www.interregemr.eu). It is financed through the European Regional Development Fund (ERDF), and also financially supported by the provinces of Noord Brabant (NL), of Flemish Brabant and Limburg, and of Liège (B), and by the Dutch Ministry of Economic Affairs and Climate Policy.