Skip to Content Jump to Main Navigation Skip to Search

The Chair of Integrated Analog Circuits and RF Systems

You Are Here: 4 Channel LED Driver

SIMO - A flexible 4-channel LED driver that requires only a single coil. 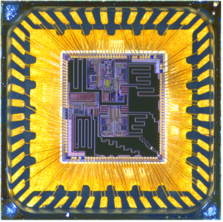 An integrated LED driver, the SIMO - Single Inductor Multiple Output, is developed at IAS. This driver can control up to four LEDs with only one chip and one single coil. A typical application for drivers of this type is, for instance, in lamps for room lighting. With the possibility to control four LEDs at the same time, the color temperature of the lamp can be adapted specifically to the daytime and the individual needs of the user.

The SIMO's special feature is its minimal Bill of Materials (BOM) and the very high efficiency of up to 96%. As external circuitry, the concept requires only a single coil to drive the LEDs from a DC voltage of 15-48V. The Figure shows the SIMO concept. The underlying circuit is a buck converter with four LED output strings. The four LEDs are selected as output by means of large switching transistors and operated in multiplexing mode. A digital control is implemented, which allows a high degree of flexibility.